Final Fantasy VII Remake, The Stuff That Should Change

Yesterday I talked about some of the things that I think should stay the same in the upcoming remake of Final Fantasy VII. While the game was groundbreaking in 1997, quickly earning a status that is sustained to this day by fans, there are some aspects of the game that have not aged very well at all. On top of that there have been changes to the fiction surrounding Final Fantasy VII, thanks to the ancillary things, like the other games and movie. So simply slapping a new coat of paint on the game and calling it a day is clearly not the answer. What should be hacked out or changed?

First thing that needs to be changed is the writing. The script for Final Fantasy VII was a damn mess. Not that translations for any games were amazing at that time, however, FFVII‘s issues are all the more glaring, probably due to the sheer size of the game. Using the original script as maybe a bad first draft, more passes are needed on the game’s writing, it needs to be improved in a few ways. Everything needs to flow better, errors need to be fixed, and one very uncomfortable character needs to be completely reworked. END_OF_DOCUMENT_TOKEN_TO_BE_REPLACED

Final Fantasy VII Remake: What I Want To Change And Stay The Same

This was supposed to be on the internet a while ago. But I tend to get lazy with these things, so here we are. E3 2015 came and went back in June, and with it came the announcement that Square-Enix has finally committed to remaking the 1997 PS1 RPG, Final Fantasy VII. An important game in not only Square’s history, but the history of video games at large, people have been clamoring for a graphical facelift of FFVII with each new generation of consoles. Square has always been cagey about the subject, saying it will not be done, saying it will not be done until they make a new game that surpasses FFVII in quality, etc. However, it seems the time for running through the excuses has finally ended. Coming to the PS4 first, Cloud stealing the identity of his best friend and performing terrorist acts will be finally coming to a new generation of game players. END_OF_DOCUMENT_TOKEN_TO_BE_REPLACED

This is a game I have been really wanting to play since before I even thought it was coming out in America. Now finally, I can go out and pick it up today. I am stuck working an overnight shift at my job tonight (Until 7am), so you can bet your ass I will be checking this out. To celebrate the North American release of this game, here is some of the absolutely amazing music.

You Are My Hope (Tiz’s Theme):

Fighting to the End (Boss Theme):

Some Game Music While I Work On The Next Post 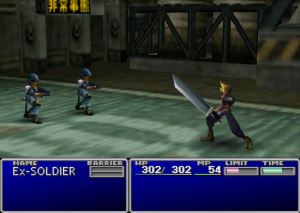 After finishing Persona 3 Portable on my Vita, I found myself wanting to play more JRPG’s. It’s a good feeling, to know that you plan on sinking a huge amount of hours into a game, especially if it happens to be one of the greats. After finishing Persona 3, I managed to snag a copy of Radiant Historia on the DS, a game I had been looking forward to getting for quite a while, as I heard it was quite good. It started out great…but past that I wouldn’t know how it is. The cart keeps freezing up on me, which is supremely depressing. I even tried restarting the game, hoping it was just a corrupted save file. However, this was not to be the case. It seems no matter what, my copy of Radiant Historia freezes at the same spot, so fuck it, it can sit around gathering dust. Maybe trying a different DS eventually will work, who knows. END_OF_DOCUMENT_TOKEN_TO_BE_REPLACED