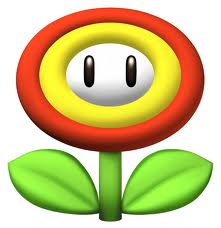 Way back in March, I wrote an article about some weapons that I always remembered in video games. These weapons always stuck with me for varying reasons, but all were worth remembering, at least for me. I have long wanted to throw out a second batch of weapons to talk about, so why not today? Right here, right now. Let’s fucking do it.

Fire Flower (Super Mario Brothers series): Only Mario could turn a pretty flower (with a face) into an evil mushroom immolation machine. This power-up has been around since the start, appearing in I think every core 2-D Mario game, with the only exception being the US version of Mario 2. If I am wrong, tell me, but I think I am correct in saying that. This power-up is really the only true projectile launcher in the series, and is typically used with game-easing results. Changing Mario to white overalls (bright freakin red and orange in Mario 3), this weapon allows Mario to basically make any boss mechanic trivial. Where the other power-ups still require you to pay attention and make sure to avoid the bosses, the Fire Flower allows Mario to stand there, while the player spams B and watch the enemy die.  This has especially been the case in the New Super Mario Bros. series, where the focus has left more insane jumps and environment traversal; and has since become more of a enemy placement based game. Think of how good the Fire Flower is in any water stage in an older Mario, and apply that philosophy of enemy placement to every type of level.

The real variety of how to tackle this level design comes in how the Fire Flower itself has evolved. By last count, there are now three versions of this flower. We have the Ice Flower, which came about in New Super Mario Bros. Wii I believe. It’s kind of cool (Ha, get it? Get it?!), allowing you to turn enemies into blocks of ice, which can serve as weapons or platforms. The other flower is so freakin stupid. The Golden Fire Flower in New Super Mario Bros. 2 on the 3DS just nets you a ton of coins while doing the same thing as the old Fire Flower from Mario’s past. This shiny version exists alongside the standard flower in the game, and feeds into the pointless coin collecting mechanic. Really though, how can any game enthusiast not remember the Fire Flower? Mario is the godfather of console games, and his weaponry should be known to all.

The Penetrator (Saints Row: The Third): Let’s move now from a storied and long-running relic of video game history, and talk about a baseball bat that is also a sex toy. The absurdity of this game was basically an eighteen out of ten, with this weapon being; at least to me, the sum total of the insanity distilled into a single weapon. Fashioned as a massive purple dildo, the Penetrator replaces the standard baseball bat. The weapon is insanely well animated, with the shaft of the bat swinging to and fro while you run with it. The balls of the dildo…yes the balls are even animated separately from the rest of the weapon, flopping out in a fashion that is best described as…disturbingly realistic.

This fake phallus is also pretty damn powerful. I have destroyed entire cars with nothing but the Penetrator, which usually sets me on fire. So here is a man with a British accent, yelling as he is on fire, near the burnt out husk of a car while holding a giant purple cock/baseball bat. Honestly that sums up the game pretty well. Also it is pretty awesome to running around beating the stupid out of the elderly and the Steelport Police Dept. Awesome weapon in a truly amazing game.

Any Sword Auron Uses (Final Fantasy X): In my last “Weapons I Remember” article, I wrote about Tidus’ sword, the Brotherhood. It is a great looking weapon, even today. Pretty much everything in Final Fantasy X holds up today in the graphics department, at least from what I have seen. One thing that I always loved in the game was the varied attack animations. Characters actually moving different from each other in battle was a practice started in Final Fantasy VII, with things finally being in 3-D. However, the now-established tradition of unique character animations would reach its zenith in Final Fantasy X, with the character Auron.

It’s not that his attacks are especially heroic, it is really the laid back attitude Auron takes to killing. Rather than swinging his over-sized sword as if he was trying to go yard on every attack (think Cloud from FFVII), he just drops the fucking thing. No matter what nation-sized cleaver Auron has in his Sixth Sense ghost-like hands, he simply drops on every enemy with such casual disregard, it cannot be anything but funny. Tidus is hopping all over the place with the frenetic energy a teenager could only have, where Auron basically looks bored the entire time, but still does the majority of physical damage early on. Seriously, go load up this game, and laugh.

The Auto Shotgun (Goldeneye): This weapon is something I have come to love more as I got older. Occasionally I will get the chance to play some Goldeneye with friends, with a popular weapon set always being Power Weapons. When we were younger, everyone would flock to the automatic weapon, the RCP-90, which is a great gun. However, now that I understand shooters a little better, and saw how Goldeneye kind of adheres to shooter mechanics, I have found the Auto Shotgun is clearly the better weapon. Really this is because it tears right the hell through Body Armor, which is usually overpowered in multiplayer games of Goldeneye. Also like the double-barreled shotgun in DOOM2, everything about this shotgun is so satisfying. Here, let’s see if we can find a video of this weapon in all its glory.

Nope, no video. Shame. I figured the internet was good for everything I need. Better yet, anyone with a N64; go pop in Goldeneye and play around with this gun. Find some friends and relive some great split-screen Goldeneye moments. Trust me, there will be plenty. Anyway, I already spoke a bunch about the weapons presented here, so I am going to hold off on the next few for another post. In the meantime, seriously, go play some god damn Goldeneye.